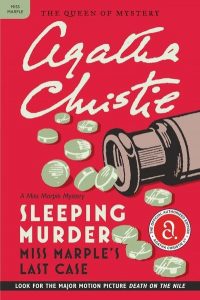 Sleeping Murder was the last Miss Marple mystery and Agatha Christie’s last published novel, coming out in 1976 after her death. Set in 1930 England, Christie tells us about newlyweds Giles and Gwenda Reed and their efforts to discover a secret buried in Gwenda’s memory.

Giles sends Gwenda ahead to find a proper house for the couple to move into and raise a family. She visits Hillside and decides it would be the perfect place with just a few alterations, except for a fleeting feeling when she climbed down the steps that she remembered seeing the body of a person below. As the house is undergoing renovation, she discovers all the changes are changing the house back to what it was. But since she’d never been there before, how was that possible?

She decides to get away for a weekend to give herself a chance to make sense of it all. She goes to spend the weekend with some of Giles’ cousins. There she meets their aunt, Jane Marple.

After Miss Marple learns from Gwenda what has happened, she expresses her concern to the doctor that perhaps it would be best to “let sleeping murder lie.”

But where would be the fun is that?

So, Gwenda and Giles begin their own investigation, with Aunt Jane usually lurking somewhere nearby. While they interview the people living in the village, they discover that Gwenda’s father had a wife to disappear when Gwenda was a little girl. As they learn more about the young girl, they learn some people will do anything to keep the past in the past.

Agatha Christie wrote Sleeping Murder in 1940 during World War II. She planned for it to be published after her death. Christie initially gave the story the title Murder in Retrospect. Christie refers to Sleeping Murder and the last Hercule Poirot novel, Curtain, in her autobiography. In the book, she mentions that she had written an additional two books during the first years of the Second World War. She feared that she would not survive working in London during the bombing. She wrote the Poirot book for her daughter and Sleeping Murder for her husband, Max Mallowan. Christie deeded the books to her daughter and husband and placed them in a vault of a bank.

This is my favorite Miss Marple mystery and a great example of a cozy mystery. (Here you can find the link to my post on cozies.)

In this story, we get to see Miss Marple at her best. (Here is a link to my article on Miss Marple.) 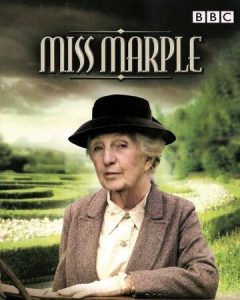 She doesn’t act dithering or flustered as she seems in some of Christie’s stories, but she comes across as level-headed and insightful. While the young couple talks to the doctor and other men involved, Miss Marple spends most of her time with the servants and the ladies of the neighborhood. Much of her information that she gathers seems to be more gossip than facts. But to Miss Marple, they are often the same thing. You just have to be able to tell the difference.

In her notes, Christie was first undecided whose case it would be, Miss Marple, Poirot, or Tommy and Tuppence.

Sleeping Murder was first adapted for television in 1987 for the Miss Marple series on the BBC. In 2001, the story was adapted for BBC Radio 4 starring June Whitfield.

I would love to hear about your favorite Agatha Christie mystery. Just leave a comment below. If you would like to get a link to my weekly columns, please subscribe either on the side panel or at the bottom of the screen.

And thank you for stopping by.