No Plan B by Lee and Andrew Child 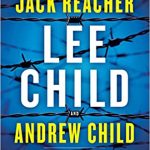 On October 25, 2022, No Plan B by Lee and Andrew Child is the 27th in the Jack Reacher series hit the stores. No Plan B was co-written by Lee Child and his brother, Andrew Child. Click here for a list of all the novels in the series.

Lee Child is one of the world’s leading thriller writers. Born in Coventry in 1954, he now lives in New York. They’ve reported that one of his Jack Reacher novels is sold somewhere in the world every nine seconds.

Andrew Child was born in Coventry in 1968. He has written several novels under his real name, Andrew Grant.

In January 2020, Lee Child announced he intended to retire from writing the Jack Reacher series and hand the reins over to his brother. Beginning with The Sentinel, the 25th book in the series, the two have been co-writing each book.

A Blurb for No Plan B

In Gerrardsville, Colorado, a woman dies under the wheels of a moving bus. Authorities rule the death a suicide. Accept that Jack Reacher saw a man in a gray hoodie and jeans push the woman to her death.

When they rule another homicide an accident, Reacher knows this is no coincidence. And that there is no time to waste to track down those responsible.

But Reacher is unaware that these crimes are part of something much larger. And to Reacher, it doesn’t matter.

Lee and Andrew Child on Writing

In honor of their book release, the brothers gave Crime Reads an interview about their writing routines and what advice they would give to beginning writers. You can listen to the interview here.

I especially like hearing about writers who don’t start at four in the morning.

A refreshing look into the writing lives of a very successful team. I can’t wait to read it.