John Creasey is one of England’s and the world’s most prolific crime writers. He wrote over 600 acknowledged novels under at least 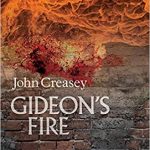 twenty-nine pseudonyms. His first published book came out in 1932. His books continued to come out until after his death in 1973. In fact, when he died, he had a backlog of books he had just finished and was waiting to have publish. The last unique work written by him wasn’t published until 1979.

Can you imagine? That productivity blows me away. And it continued for over forty years. But it wasn’t just his output. It was also the range of the characters and plots that he created. One article about him claimed that the plots and characters of his stories were so different, it was like the series were written by twelve different writers.

Not only did he have tremendous output and a range of voices, he also wrote in several different genres: including science fiction, romance (under female pen names), and western novels.

And finally, he wrote with exceptional quality. His work in the 1950s and 60s rank among the finest crime fiction penned in the twentieth century.

So, let’s look at some questions about this amazing man.

Where did Creasey come from?

Born in London on September 17, 1908, to a poor coach maker, John Creasey was the seventh of nine children. He contracted polio at an early age, which affected his leg, causing him to have a limp for the rest of his life.

At the age of ten, inspired by one of his teachers, he announced his intention to become a writer. His family laughed at him. Blue-collar Londoners didn’t write, they worked real jobs. And with eleven mouths to feed, they needed everyone to help out.

So, he wrote at night while he worked factory, clerical, or sales jobs. He lost several of his jobs because he either fell asleep or was caught writing on the job. And publishers seemed to think the same of his writing as he racked up 734 rejections. (That’s right. 734. Can you say think skinned?)

Finally, in 1930, he had his first book published, after writing ten books that no one accepted. And in January 1932, he published his first crime novel, Seven Times Seven. The story involves a criminal gang and a beautiful film star.

When World War II started, Creasey wanted to serve Great Britain but couldn’t join the military because of his leg. So, he determined he would entertain the troops and the workers at home with his stories. He went into overdrive, writing thirty-six published novels a year from 1940 to 1945.

How did Creasey do it?

When John Creasey began writing full time, he quickly realized he couldn’t support himself and a family on the income from the traditional way of producing two books a year. So, he wrote under a variety of pseudonyms. His goal was to write six to seven thousand words a day on his manual typewriter.

Early in his career, he turned out two books a week. He worked seven days a week, with a break midweek to play cricket. In response to criticism of his earlier books, formulated plots and lack of character depth, he slowed down to pay more attention to revision and character development. Still, he averaged a book a month.

In explaining his writing process, he said he turned out a rough draft in seven to ten days. Then he would set it aside for a few weeks. While he waited, he would start another story, then another, and another. He could be working on over a dozen storylines simultaneously. All with distinct tones, characters, and plot lines.

He didn’t consider a first draft finished until after at least six months. By that time, he had completed several revisions and could pronounce the book ready for publication.

After several years of writing, he hired professional readers to study his drafts to find weaknesses in his plots, characters, and/or style.

Creasey never had an agent. He sold his books directly to his many publishers. In the US, his major publishers were Harper and Scribners.

When WWII concluded, he had become successful with a large manor at the seaside resort of Bournemouth. However, he realized his books weren’t selling internationally. So, he went on a worldwide book tour. (Wouldn’t he have loved the internet and blog tours?) He sold his house, loaded his then-wife and two sons in the car, and left a year-and-a-half tour of the world. They visited Europe, Africa, Asia, Australia, and North America.

In every major city, Creasey called on the local publishers. By the time the family returned to England, he had publishing deals from South Africa to the USA, India, and Australia. He even sold some of his spy novels to Eastern Bloc countries, such as Czechoslovakia and Hungary.

What were his most popular series?

John Creasey wrote over a dozen series under his own name and various pen names. Department Z is one of his earliest series with racy tales of espionage and counterintelligence. Department Z is a British Intelligence agency in the early 1930s, comprising an ultra-secret collection of civilians. The stories started in 1933 and ran to 1957.

In 1938, Creasey created a series around the Honourable Richard Rollison, an aristocrat and amateur sleuth. Known as the Toff, an English slang 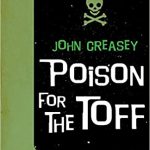 Poison for the Toff by John Creasey

term for an aristocrat, the series ran from 1938 to 1978, and included fifty-nine novels. The Toff was a wealthy bachelor, standing over six feet tall with dark hair. Although the settings changed with the times, Rollison maintained an age of around forty. (If only we could do that in real life.)

Arguably, he wrote his most popular series under the pseudonym J. J. Marric. The Commander George Gideon series began in 1955. A London police officer, who lived near Creasey, mocked the style of his Roger West books. He challenged him to write something more realistic about a police officer.

The result was Commander Gideon, who tackled crimes from serial murder to white-collar fraud consisting of smuggling and terrorism. Gideon first appeared in Gideon’s Day, published in 1955.

The Gideon series followed a policeman, who plunged himself into his work to escape the pain of losing one of his children. Unlike his earlier stories that were lighter and could run on Saturday nights in the 60s, Gideon’s stories showed police work that was methodical, often grim, and with crimes carried out by truly evil villains.

Gideon’s Fire, published in 1961, won the Mystery Writers of America’s 1962 Edgar Award for Best Novel. It was also the basis for the television series Gideon’s Way, that ran from 1964 to 1966.

In the June 19, 1973, the New York Times asked Creasey why, after he had attained such wealth and success that many would be envious of, he continued writing 6000 words a day. In his reply, he referred to the years of rejection from his family and publishers he endured when he began. His many successes evidently weren’t enough.

Not only was John Creasey such an accomplished writer, he also ran for a position in the British Parliament and formed his own political party. He founded the UK Crime Writers Association (CWA) and was one of the few non-Americans presidents of the Mystery Writers of America.

How did John Creasey write over 600 mysteries from 1932 to his death in 1973. @TimSuddeth @OpeningaMystery #amwriting #Mysteries Click To Tweet
FacebookTweetPin