Dorothy L. Sayres: A Queen of the Golden Age

Mystery readers have long named Dorothy Leigh Sayers as one of the queens of the Golden Age of British detective writing. Best known for her Lord Peter Wimsey mysteries, Sayers had a very full and interesting life. 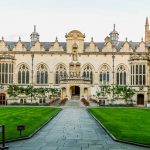 Dorothy was born on June 13, 1893, in Oxford, England. Her father was a chaplain of Christ Church Cathedral in Oxford, and headmaster of the Cathedral Choir School. Her mother was the daughter of a solicitor.

An only child, her father started teaching her Latin at six years old. She grew up in the village of Bluntisham and the graveyard next to the rectory has tombstones with many of the surnames used in her books.

In 1912, Sayers received the Gilchrist Scholarship for modern languages to Somerville College, Oxford. She studied in modern language and medieval literature and graduated with first-class honors in 1915. However, Oxford did not award degrees to women at that time.

The position of the school changed a few years later, and she was among the first women to receive a degree. In 1920, she graduated with an MA.

After college, Dorothy L. Sayers went to work with Blackwell Publishing, where she had two books of poetry published. Then in 1922, she went to work as a copywriter at S. H. Benson’s advertising agency in London. They credit her with coining the slogan, “It pays to advertise.”

In 1923, she published “Whose Body?”, a murder mystery novel featuring Lord Peter Wimsey. He went on to feature in eleven novels and several short stories. Sayers once said that Lord Peter was a mixture of Fred Astaire and Bertie Wooster, a character in the comedic Jeeves stories by P. G. Wodehouse. The stories became popular enough that she could quit her job and leave Benson’s.

The Wimsey series looked at life in England in the period between the World Wars. Men were coming home from the army with expectations to return to their earlier lives and jobs. And women, who had taken the jobs the men left, didn’t want to leave.

Toward the end of 1930, Sayers stopped writing crime fiction and turned instead to religious plays, essays, and translations. She turned her attention and training to completing a translation of Dante’s Divine Comedy. She completed Hell in 1949, and Purgatory in 1955. The third volume, Paradise, was unfinished at her death and Barbara Reynolds completed in 1962.

Sayers’ translation kept to the original Italian rhyme scheme and commended for its helpful notes and comments.

Dorothy L. Sayers married Captain Oswald Atherton (Max) Fleming, a Scottish journalist, in 1926 in London. They lived in a small flat in the West End of London, a fashionable area. He worked as an author and journalist. But like with Agatha Christie, Sayers had to watch as her husbands health declined and he was unable to work.

Sayers’s friends included C. S. Lewis and G. K. Chesterton, whose lectures she attended while at Oxford.  In a letter to Chesterton’s widow at the time of his death, Sayers wrote, ““I think, in some ways, G. K.’s books have become more a part of my mental make up than those of any other writers you could name.” She was not a part of the Inklings but did join Lewis’s meetings of the Socratic Club.

Upon the reading of her will, it was revealed that her nephew, Tony, was actually her son. She had given him to her cousin, Ivy, to raise and passed him off as her nephew. In 1935, he was adopted by her husband and Sayer was constantly a part of his life.

Sayers was one of the founders of the Detection Club in 1930. Its members included Agatha Christie, Hugh Walpole, and Baroness Emma Orczy. Its first president was G. K. Chesterton. In addition to meeting for dinners and helping each other with their writings, the group agreed to adhere to a list of rules to give the reader a fair chance to guess the guilty party. Sayers participated in contributing to some of the collaborative works the club produced.

The club still exists today. Recently, according to member P.D. James, they still used the induction oath that was written by Sayers.

Lord Peter was one of the first titled detectives ever written. Aristocratic, he was an amateur detective, often helping the police with their cases. At the time, the average English citizen had a low opinion of the police, and they would be more willing to confide in Lord Peter.

Like Sir Conan Doyle, Dorothy L. Sayers seemed to have tired of her creation. While writing Strong Poison, she introduced the character of detective novelist Harriet Vane. Harriet, like Sayers, had an Oxford education, which was unusual at the time. And in the story, the police suspect Harriet of poisoning her lover. (There’s that Golden Age fascination with poison.) Lord Peter immediately falls for her, but she rejects him.

Instead of killing off Wimsey, like Doyle did Sherlock Holmes, she was hoping to end him through matrimony. However, the combination reanimated Wimsey such that she was not able “to see Lord Peter exit the stage.” She comes around in Gaudy Nights 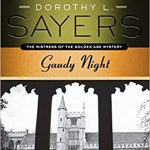 and marries him in Busman’s Honeymoon.

Unlike many writers from the Golden Age, Sayers’ writing has held up and is still very popular. The trials she faced in life fueled much of her writing and kept her stories credible to this day.

At her death in 1957, many critics considered The Nine Tailors to be her finest work. Sayers, however, was most proud of her translation of Dante’s Divine Comedy.

What is your favorite Dorothy Sayers’ story? Let me know in the comments below.

And thanks for visiting Opening a Mystery.