Critical Review of The Last Mile 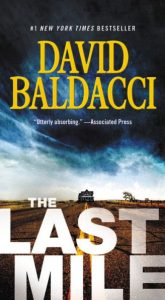 The Last Mile by David Baldacci

The Last Mile is the second entry in David Baldacci’s Amos Decker series.

Amos Decker is a former NFL football player who, just as his pro career started, received a traumatic brain injury. The injury not only knocked him out of football but, also, left him with a disorder in which he remembers everything, including the painful events he would rather forget like the murders of his wife and daughter.

The Last Mile begins with Decker headed from Burlington, Ohio to Quantico, VA to take a position with a newly-formed team at the FBI. The team combines combining FBI agents with civilians who have their own special gifts.

Fate intervenes when Decker turns on his radio and listens to a PBR broadcast. He hears the story of Melvin Mars who had been on death row for twenty years for the grisly murder of his parents. Some of the details of the case reminds Decker of his own life. As Mars was on the way to be executed, he learns that he has just received a pardon. A man in another state has confessed to the murders. The catch is he is to be executed within a few days.

Decker asks an obvious question. After twenty years, why should the real killer come forward now?

He convinces the new team to investigate the case, only to learn that there is much more involved than first thought. When the case begins taking some unexpected turns, the FBI team is told to drop the case and return to Quantico.

Leaving Decker determined to continue without the FBI.

David Baldacci leads us on a captivating adventure with many thrills and twists. The characters are diverse and well written.

Some Takeaways to Consider in Our Stories

The Last Mile left me with a couple of thoughts about the choices a writer has to make about their characters. It is hard to give someone a special gift like Decker’s memory and make the reader appreciate both its strengths and weaknesses. We don’t see him struggle with unwanted thoughts coming at the wrong time and hampering the case. That might be wise because it could have bogged down the story. But if you give a character a gift, like Superman’s strength, you can lose the tension of how he will get through this.

Decker’s reticence also plays to this. Readers like the quiet, strong guy. But like his frustrated girlfriend, the reader can have a problem knowing and connecting with such a character.An author has to find the balance between being strong and being vulnerable. You can have both. Courage is not the absence of fear, but the determination to slog through it.The tough, quiet guy can have a big following, like Lee Cobb’s Reacher, John D. MacDonald’ Travis McGee, and, I am sure, Amos Decker. Showing more vulnerability, on the other hand, might increase the tension and help the reader identify with the character.

The Last Mile is a strong entry into what I hope is a long series. Amos Decker is a character who leaves us wanting to get to know him better.