Whether it’s from his novels, films, radio, short stories, or TV, Ellery Queen is one of the premier names in the world of mysteries. He has been read, watched, or listened to all over the world. But answering who Ellery was, that is a little more complicated.

Ellery and Father from the 70s TV series

Ellery Queen was the main detective character in over thirty crime novels and short story collections from 1929 – 1971. He first appeared in The Roman Hat Mystery in 1929. He was the adult son of Inspector Richard Queen of the New York Police Homicide Squad and was an author who spent most of his time with his nose stuck in a book. His father leaned on him to help solve the murder.

It is hard to describe Ellery with one description as he changed over the course of the series. He began as a bookworm assisting his father in New York. His mother had passed away and there was no interest in women, in fact they both lived a decidedly bachelor lifestyle wanting only to spend their evenings in the apartment they shared.

In the late thirties, Ellery, like his authors, moved to Hollywood to begin writing movie scripts. He no longer assisted his father on police cases. And he found time for women. In Hollywood. Who would have guessed. The cases became less police procedurals and took on more psychological elements.

Beginning in 1942, Ellery Queen moved to a fictional New England town called Wrightsville. This let them loosen the structures even more and allowed more emphasis on relationships and less on the details of the case.

In 1932, Ellery Queen was invited by Columbia University to present a lecture on mystery writing. The catch was that Ellery wasn’t a person, but a pseudonym for two cousins and they didn’t want to reveal that Ellery wasn’t a real person. To decide who would address the school, they flipped a coin. The loser addressed the college wearing a mask.

The brains behind the great detective were two cousins from Brooklyn, New York. Frederic Dannay and Manfred B. Lee were close cousins. They were both born in 1905, bore a close resemblance to each other, and often finished each others sentences during interviews. Together, they edited collections of short stories under the Ellery Queen name and founded the Ellery Queen Mystery Magazine that still comes out bimonthly. Manfred was the loser of the coin toss and continued in the guise of Ellery Queen, wearing a mask.

Dannay and Lee were prolific writers. Not only did they produce over thirty Ellery Queen novels. They also wrote nineteen plays, a screen play, radio plays from 1939 to 1948, and numerous short stories. They wrote four novels about the detective Drury Lane under the pseudonym Barnaby Ross.

They were early pioneers in franchising when in the sixties they commissioned more than twenty-five crime thrillers from other writers. These were published as paperbacks under the Ellery Queen name. Many of them were outlined by Dannay.

Ellery Queen mysteries fit the style commonly known as the Golden Age of Detective Fiction. Other writers of the style include Agatha Christie, Philip MacDonald, and Dorothy Sayers. It was very popular before World War II. Afterwards, the stories became grittier, less gentile.

Ellery Queens stories were looked at as games, puzzles. The writers were careful to give all the clues to the reader that the detective would have. A crime, usually a murder had to happen early. The murder had to be presented near the beginning of the book. Although there would be numerous ‘red herrings’, the clues could point to only one person as the criminal. “Fair play’ was important and taken very seriously. If other writers thought another cheated, say by introducing an identical twin at the last moment, they would be called out in reviews.

With many of the Ellery stories, the reader would find the following elements: a geographic title, an unusual crime, complex set of clues, and multiple possible solutions until the climatic reveal. In the early books, there would be a page near the end declaring that the reader has all the clues and challenging them to give the answer. This disappeared as the public became less interested in a puzzle and more interested in the characters and relationships.

Review of The Roman Hat Mystery 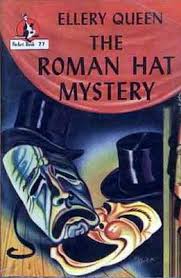 The Roman Hat Mystery introduced us to Ellery Queen. Inspector Richard Queen is given the case of a murder in a crowded theatre during the play, Gunfire. Everyone was so intent on the actions and sounds from the stage that no one knew that a man had been killed until the police stopped the play. When the Inspector fails to come up with an answer, he is happy to see Ellery come in the door. The most suspicious thing about the crime scene was what wasn’t there. Where was the man’s hat?

In this day of men wearing shorts, jeans, and tee shirts, we don’t usually think of going to the theatre in formal wear. And the best most men can do is a work suit and their suit they wear to funerals. But a hat? This was a different time and Ellery immerses us in it totally. Back then, anyone wearing formal wear would have to have a top hat. But after turning the theatre over, they couldn’t find it. And they were careful to make sure no man left with two.

So, where was it? And why was it important?

The Roman Hat Mystery revealed a different time for policing. This was in the early days of forensic, toxicology tests, and fingerprints. The characters were diverse and well developed. Watching the Queens wade through the suspects lies was a lot of fun. We can see why the series lasted so long.