Daughter of the Morning Star by Craig Johnson 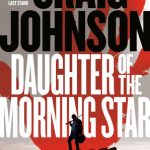 Daughter of the Morning Star by Craig Johnson

Longmire grew up in Absaroka County and played football at the University of Southern California. He and served in the Marine Corps as a military police officer where he earned several medals. Throughout the series, we’ve seen several of his relationships change. But one that has stood true is with his high school friend, Henry Standing Bear. Standing Bear is a giant of a man who is an integral part of the Native American culture.

In Daughter of the Morning Star, Tribal Police Chief Lolo Long contact Longmire to look into the threatening letters to her niece, Jaya ‘Longbow’ Long. Since Jaya’s sister went missing the summer before, Long’s worried that the threats may be more than just kids having fun.

The first obstacle that Longmire faces is how to overcome the petulant and distrustful nature of the high school basketball star. Jaya has offended everyone around her, including her team. She goes so far that her coach throws the star player off the team, during the playoffs.

But the brooding teenage girl isn’t Longmire’s only problem. Her white supremacist father has hired some of his buddies to protect his daughter, with not the best results.

Johnson points some really critical issues happening to Native American women. On the Tribal Lands, there is a scourge of women going missing with little media attention. In the Acknowledgements Johnson wrote, “The chances of a Native woman being murdered is ten times the national average [and] murder is the third leading cause of death for indigenous women.”

Johnson gets us caught up in the threats to the young girl and guides us into Native American mysticism. Longmire slips and strikes his head when he goes after his dog, Dog, who runs into a canyon. The sheriff encounters a cougar, hears a Cheyenne song, and finds a red scarf before passing out. When he later finds his way back to the cabin, he learns he had lost an entire day.

He follows a Native legend of the Wandering Without, “a collective of lost souls that hunger for the living.” It felt like this would become a big part of the plot of the next book, Hell and Back, coming out in September.

Craig Johnson has received much praise for his writing over the years, including the Spur Award from the Western Writers of America and the Will Rogers Medallion Award. I am sure he will be attending a lot more award dinners.

I really enjoyed the story, but when it came time to recount what happened, I had trouble. Some plotlines just fizzled out, but maybe Johnson plans to address them in the next book. I enjoyed riding in Standing Bear’s truck that may or may not start. And going with Dog through a gate and watching how the Doberman guard dog reacts. Johnson has the gift of putting you in the store, and that is what I’m looking for in any book.