In 1887, an eye doctor with no patients had his first story published about a ‘consulting detective’ who would one day take over the world. In Sir Arthur Conan Doyle’s A Study in Scarlet the world’ gets its first glimpse at what would become the most famous detective in crime fiction, Sherlock Holmes.

There had been a handful of detectives in fiction before Holmes, but no one came close to his popularity. Even today, readers often consider him as the quintessential detective who many of today’s mystery writers try to emulate.

A Study in Scarlet

Inspiration for the Character

Conan Doyle repeatedly claimed that Holmes was inspired by the real-life figure of Dr. Joseph Bell. Dr. Bell was a surgeon at the Royal Infirmary of Edinburgh and a lecturer at the medical school of the university of Edinburgh. Conan Doyle worked for him as a clerk beginning in 1877. Bell had a reputation for drawing broad conclusions from close observations. Later, however, Bell wrote to Conan Doyle, “You are yourself Sherlock Holmes and well you know it.”

According to Irving Wallace, Bell had been involved in several police investigations, mostly in Scotland. He assisted forensic expert Professor Henry Littlejohn and gave an analysis of the Jack the Ripper murders to Scotland Yard. His skills of deduction caused Bell to be considered a pioneer in forensic pathology when authorities didn’t use science in criminal investigations too often. In 1892, Conan Doyle dedicated The Adventures of Sherlock Holmes to Dr. Bell.

We owe the accepted appearance of Sherlock Holmes to Sydney Paget. He used his brother as his model when he illustrated the Holmes stories for The Strand Magazine. Especially the deerstalker cap, which is not mentioned in the stories.

The meerschaum pipe that they often show Holmes’s smoking is because of the actor, William Gillette, who first portrayed the character on stage.

Conan Doyle wisely paired Holmes with the patient, and often befuddled, Dr. John H. Watson in The Study in Scarlet. Watson stayed on as Holmes’s friend, companion, assistant, and biographer throughout the series.

Conan Doyle used Watson as the sounding board for Holmes so that we could see Holmes at work before he explained how he came to his conclusion to Watson. By using Watson, Conan Doyle made Holmes more personable and accessible to the reader. Sherlock was more into his studies than dealing with people. In fact, Holmes admitted Watson was his only friend. Most nights he spent in his apartment. His investigations often energized him and brought him out of 221 B Baker Street.

In Doyle’s early outlines, Holmes’s associate’s name was Ormond Sacker. Doyle had a friend, Dr. James Watson, who might have had an influence on the name.

Since the success of Holmes, the use of a character who had a reason to be close to the detective but can’t follow or understand the detective’s line of investigation became a standard feature in crime fiction and is called ‘the Watson’.

Watson was an assistant surgeon in the British Army. After he recovered from being shot while serving in Afghanistan and suffering enteric fever, the army sent back to England with a pension for nine months. While he built his medical practice, a friend introduced him to Holmes, who was looking for someone to share his flat. Watson watched several eccentric guests coming to visit, and Holmes admitted to being a consulting detective and they were his clients.

After helping Holmes on a case, the doctor became angry that his new friend didn’t get any credit in the press. When Holmes refused to record and publish his account, Watson took on the task himself. During many of the cases, this became a bone of contention when Holmes criticizes the story for being too sensational or not getting the nuances of the case correct.

In the short story, The Final Problem, published in 1893 in The Strand Magazine, 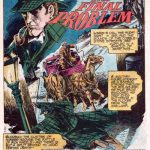 Holmes’s archenemy, Professor Moriarty, pulled Holmes over a cliff to his death. Moriarty was the criminal genius behind an organized secret criminal force. The cocky Holmes admitted the professor was his intellectual equal.

Doyle was tired of writing about the popular detective. He felt that the mysteries that he was writing as entertainment were taking him away from what he considered was his more important work. He wrote to his mother (My mom would be so pleased.), “I must save my mind for better things, even if it means I must bury my pocketbook with him.”

It seems he nearly did.

The public’s reaction was immediate and unlike anything ever seen before. The Strand Magazine nearly went under when 20,000 people canceled their subscriptions. Conan Doyle’s son later wrote that men wore black mourning crepes on their hats or around their arms for months.

Conan Doyle strongly defied the public, and the attack on his pocketbook. That lasted for eight years. Finally, in 1901-1902, Holmes returned to the readers in The Hound of the Baskervilles, published in The Strand Magazine. Although set before the death of Holmes, its success convinced Conan Doyle to bring the detective back from the clutches of death.

In 1903, Conan Doyle wrote a story that returned Holmes from the dead in The Adventure of the Empty House. It was first published in the US in Collier’s in September 1903, then in The Strand Magazine in England in October 1903. Holmes reappeared, explaining to a stunned and grieving Dr. Watson that he had faked his own death to confound his enemies. He had spent the last few years running from Moriarty’s gang and traveling to various parts of the world.

Holmes Retires, Or Not 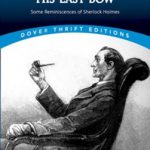 Sherlock Holmes comes out of retirement

In His Last Bow, a collection of short stories published in 1917, Watson wrote in the preface that Holmes had retired to a small farm on the Sussex Downs and taken up beekeeping. In the short story, Holmes and Watson go undercover to still some important papers from German spies. After the arrest of the spies, Holmes returns to his peaceful and secluded farm in the English countryside.

Even though Conan Doyle has long passed, we do not have to mourn the end of Sherlock Holmes. Authors are continuously writing fresh stories, sometimes with Watson, and others with new characters. Perhaps the most popular current series with Holmes is by Laurie R. King’s Mary Russell and Sherlock Holmes series.

Holmes remains very popular on screen, whether portrayed by Benedict Cumberbatch on BBC1 or on Netflix.

King said that Holmes has endured for so many years because “he is an archetypal figure: A human superhero, whose powers could be ours, who uses tools of science and observation available to us all. We could be him, if only we were a little more clever, a little more dedicated. He throws himself against evil with all his strength and wits. And if we would rather he had a slightly more human face when he did so, that’s what Watson—or Mary Russell, is for.”