John Grisham’s name is synonymous with a best-seller. When you think of legal thrillers, John Grisham is one of the first names that comes to mind. Since his first book, The Firm, came out in 1987, he has kept a place on the New York bestsellers list. And if you’ve read any of his books, or seen his movies, you’ll understand why. 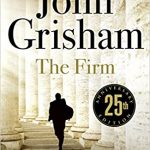 The Firm, Grisham’s first bestseller, has sold over seven million copies and was the number one novel in 1991. The success of the book led to a movie with Tom Cruise and a television show that lasted a year.

According to the Academy of Achievement in 2020, his books have sold over 300 million copies and he has written 28 consecutive number best sellers. And counting. He is one of only three authors to have over two million copies sold on a first printing, joining Tom Clancy and J. K. Rowling.

Besides The Firm, Grisham has had eight of his other novels adapted into film: The Chamber, The Client, A Painted House, The Pelican Brief, The Rainmaker, The Runaway Jury, Skipping Christmas, and A Time to Kill.

How Grisham Became a Writer

John Grisham was a small-town lawyer and a representative in the Mississippi state legislature when he began writing a novel between meetings and court hearings. The idea for his first book came when he heard a 12-year-old girl testify of her rape.

Watching her father, he began imagining what would happen if the dad sought revenge on his own. The idea struck him so vividly that he started writing A Time to Kill.

“It took me three years, and most of the time I thought I would never finish it,” he told The Guardian in 2011.

He queried forty to fifty publishers with A Time to Kill. They all rejected it. Two years later, a small New York publisher picked it up and printed 5000 copies. Because of the publisher’s lack of marketing, Grisham bought a thousand copies and went on a book tour.

“Eventually 5,000 hardbacks copies were sold, and I was thrilled. But they did not sell out, it did not get a second edition, it was not published in paperback or picked up for foreign rights. Then I wrote The Firm.”

It was while he was on an early book tour when he got some advice his readers will always be thankful for. “A very young executive with a big book chain just said in passing that ‘the big guys come out every year.’ He meant the likes of Clancy, King, Crichton, Ludlum, Follett. I heard that loud and clear. At the time, I was about halfway through The Pelican Brief and had no idea when it would be finished or published. But I went home, locked myself away for 60 days and finished the book.”

A year later, he published The Client.

“Those three books had an enormous impact on everything that followed.”

When John Grisham finished his first draft of A Time to Kill, it was over 900 pages. This taught Grisham the importance of writing with an outline. His method is to write a paragraph or two for each chapter, hoping to be done by paragraph 40.

“The more time I spend on the outline, the easier it is to write the book.”

Grisham is a big believer in routines. He would start writing the book on January 1, hoping to be done by April. He got in his office at seven and would write to ten, five days a week. He’s found these hours to be his most productive hours. Some days he only gets 1 thousand words written, other days he may reached two thousand. The trick is letting the outline keep him on track, but not allowing it to miss opportunities to improve it.

“I don’t write the first scene until I know the last scene.”

He has three requirements for his outline. First, the beginning should be captivating. Second, the middle must sustain the plot. And third, the ending must be unpredictable.

In 2016, his office was in another building. It did not have a phone, fax, or internet. He did all his writing offline to stop distractions.

For beginners, he recommends that you should write at least a page a day. It is hard to stay connected to the story otherwise.

When he was asked by Soledad O’Brien, at CNN at the time, if he works on one book at a time, he answered, “I work on a couple of ideas and most of them don’t stick.”

That gives me hope as a writer.

John Grisham and his wife, Renee Jones, keep homes in Oxford, Mississippi and near Charlottesville, Virginia. After loving baseball in his youth and aspiring to play in the pros, he is a generous supported of various little league teams. He has also endowed a writing scholarship at the University of Mississippi.

In 2006, Grisham published a nonfiction book, The Innocent Man, about the real-life case of Ron Williamson, a former professional baseball player who had been wrongly sentenced to death for murder. He has continued to champion cases that have been overlooked or treated unfairly. He is a board member of the Innocence Project, an organization that promotes the use of DNA to exonerate the wrongly convicted.

His latest book is The Judges List. It is about Lacy Stoltz, a reporter who suspects she knows the identity of a serial killer. Only he’s a judge. And from its reviews, Grisham may have written his best book yet.