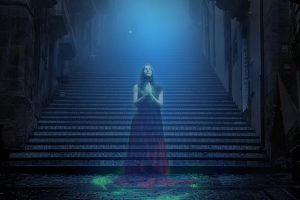 October has arrived and what better time could there be to discuss paranormal thrillers. This is the time of year when we turn our attentions to ghosts and ghouls. With Halloween approaching quickly, I enjoy thinking about a world that includes multiple dimensions.

I particularly like the idea of mysteries containing ghosts. That there are other types of ‘persons’ that we can interact with. It doesn’t work theologically, but imaginatively, they are fun to consider, like a talking pet.

Ways to Include Paranormal Phenomena

The author can include ghosts or other paranormal in two ways. First, humans and the other existing in a society together, living in knowledge of each other. Anita Blake: Vampire Hunter is an example. The community considers the supernatural citizens with the same rights as humans. Part of Anita’s evolution involves going from seeing the other as monsters to seeing their communities to be protected.

The second way writers include the paranormal goes back to the old ghost stories. The human, or at least their society, doesn’t believe in the existent of ghosts and the ghost, or whatever, has to convince the human they exist.

The movie Ghost, with Patrick Swayze and Demi Moore, exemplifies this. Someone murdered Patrick Swayze, and he wanted to protect his wife. However, he couldn’t get her to see or hear him. Swayze discovers he can communicate with a local quack medium, Whoopi Goldberg. The medium can’t believe a spirit is trying to communicate with her. This crazy plot makes a terrific date movie.

A series that I’m glad I’ve discovered is Heather Graham’s Krewe of Hunters. The krewe of hunters is a special group in the FBI with the ability to see and talk to ghosts. Each of the stories that I’ve read deals with someone, often a law officer, having their first exposure to a ghost involved somehow in a murder. Graham mixes ghosts, romance, New Orleans, and the FBI, what could be better than that?

Presently, the series includes 57 novels and short stories. Here’s a link to the list.

Another series I like is Karen White’s Tradd Street series. 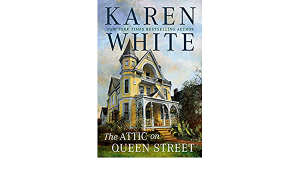 Set in Charleston, SC, the stories are about Charleston native, Melanie Middleton Trenholm, who owns a house in the historical Battery neighborhood. Melanie tries to keep her gift of hearing ghosts a secret until it threatens the people around her. I liked how White painted the picture of Melanie being bombarded by spirits as she walked down one of the city’s iconic streets.

If you like to spend your evening afraid to turn the lights off, consider picking a spooky mystery. Here is a link to 15 Paranormal Books to Read Right Now.