“All The Devils Are Here” by Louise Penny 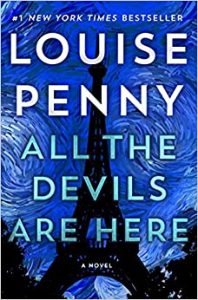 All The Devils Are Here by Louise Penny

Chief Inspector Armand Gamache is enjoying his first night with his family in the beautiful city of Paris. He and his wife look forward to spending some time with their son and daughter. And they will get to know their grandchildren better. They are also hoping that their very pregnant daughter will deliver before they have to leave.

Armand’s godfather, Steven Horowitz, a man with a fortune who is in his eighties joins the family for dinner. While they are enjoying an after-dinner stroll down one of the city’s romantic streets, a delivery van picks up speeds and runs into Stephen.

Although he is out of his jurisdiction, Armand searches for who attempted to murder murder he loved so much. Armand has to confront that his godfather who raised him after his parents  died has lost his fortune. And he is suspected in being involved with the Nazis. He, also, has to work with the Parisian police who may have their own schemes.

Then, when the investigation incriminates his own son, he has to decide how far he will go to protect his own family.

Penny has written a wonderful quick read. Although this is Penny’s first book set in Paris, she does a great job of bringing the setting to life. She takes us to the streets of Paris at night and show the ugliness that the city’s romantic reputation can hide. The story takes us to the top of the Eiffel Tower down to the basement of the Paris Archives. We, also, learn that the Paris Surete looks down on what the consider the lesser Surete of Quebec.

Two of the most important principles to Armand tug him in different directions , doing what’s right and his love for his family. How could his son be involved in a conspiracy that threatens the whole world? And who can he look to for the truth?

I found the book to be a worthy winner of an Agatha Award. This story grips your attention to the very end.

Probably what Penny worked so hard to accomplish.

Here is a recent article on Louise Penny that gives a more personal look into this engaging writer. (Click here.)