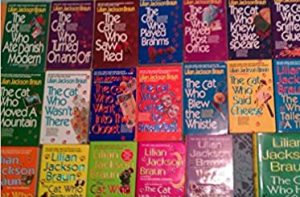 The Cat Who books

In the 1980s and 90s, I remember being one of the many readers caught up on the speeding train known as The Cat Who . . . series. Lillian Jackson Braun ‘s The Cat Who series introduced us to a former big-city journalist. Jim Qwilleran,  who had moved to a small town called Pickax, which was “400 miles north of everywhere.” Which was located in Moose County, no less. In total, she wrote 29 novels for the series. For many years, she had a new book coming out annually, usually just before Christmas. And I couldn’t wait for the next one to arrive. I’m cheap, but this was the one series I collected in hardback.

It was fun to curl up and read of the happenings in and around the small town, sometimes by the lake in the summer, but often with the threat of a town-closing snowfall in the forecast.

I have to admit, it wasn’t so much for the mystery that I was looking forward to.  No, her strong points were  the settings and the characters in the stories. END_OF_DOCUMENT_TOKEN_TO_BE_REPLACED