John D. MacDonald was one of the most prolific and acclaimed American writers. He is best known for his Travis McGee series and the many TV shows taken from his writing. Stephen King praised MacDonald as “The great entertainer of our age, and a mesmerizing storyteller.” 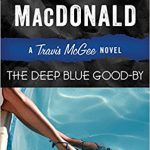 But he cut his chops by writing for numerous pulp magazines in the 30s and 40s. He wrote over 500 short stories for over 20 magazines and under several pseudonyms. Between the years 1945 to 1986, he sold an estimated 70 million books, third in detective fiction behind Perry Mason and Mickey Spillane.

John D. MacDonald, known to his friend as John D., was born in 1916 in Sharon, Pennsylvania. When he was 18 (1934), he spent several weeks in Europe, creating a love for travel and photography.

He attended Wharton School of the University of Pennsylvania, leaving during his sophomore year. He later went to Syracuse University, where he met his future wife, Dorothy Prentiss. They married in 1937 and he graduated from Syracuse in 1938. In 1939, he got his MBA from Harvard University. The education he received in business and economic shows in some of his later work. END_OF_DOCUMENT_TOKEN_TO_BE_REPLACED