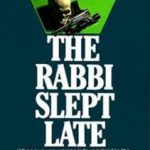 I am so excited about today’s post. Sometimes, when you go through your email list, you find a treasure. And that is how I feel about this post.

One of the goals here at Opening a Mystery is to introduce our readers to authors and series who have lost their popularity. Today’s post comes from the Ellery Queen Mystery Magazine website. (You can find their blog here.)  Arthur Vidro, a specialist on traditional mysteries, tells us about one of their writers whose stories they first published in 1947.

Harry Kemelman (b. 1908) was a contemporary of the Ellery Queen cousins (b. 1903) and John Dickson Carr (b. 1906). He published his first novel, Friday the Rabbi Slept Late, in 1964. That began his Rabbi Small series and earned him a 1965 Edgar Award for Best First Novel. His mysteries provide the reader a window into the Conservative Judaism culture. NBC made the story into a Made-for TV movie, Friday the Rabbi Slept Late, which aired on NBC in 1976, starring Art Carney as Chief Lanigan and Stuart Margolin as Rabbi Small.

I hope you enjoy learning more about this talented writer. Click here for the article.