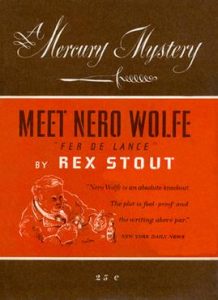 The creator of the characters of Nero Wolfe and his assistant, Archie Goodwin, Rex Todhunter Stout was one of the most popular and prolific crime fiction writers of all times. Upon his death in 1975, he had 57 books in print, more than any living American writer at that time. His books appeared in 22 languages and sold a total of 45 million copies as of 1975.

Rex Stout was born in 1886 in Noblesville, Indiana, to Quaker parents. The couple had nine children; Rex was the sixth. (So, how did he create a character like Nero who was such a recluse?) END_OF_DOCUMENT_TOKEN_TO_BE_REPLACED